Deteriorating business conditions, coupled with the South Australian Government’s controversial State Budget, have triggered an alarming increase in pessimism for the future, and a significant drop in business confidence amongst South Australians, according to the latest BankSA State Monitor released today.

Conducted by independent research firm, The Sexton Marketing Group, the State Monitor – now in its 20th year - reveals that local business confidence has collapsed to a four-year low, tumbling 8.3 points since the last survey in February 2017, from 104.0 points to 95.7.

Significantly, the State Monitor findings show the recent State Budget has contributed to the alarming spike in pessimism among respondents. 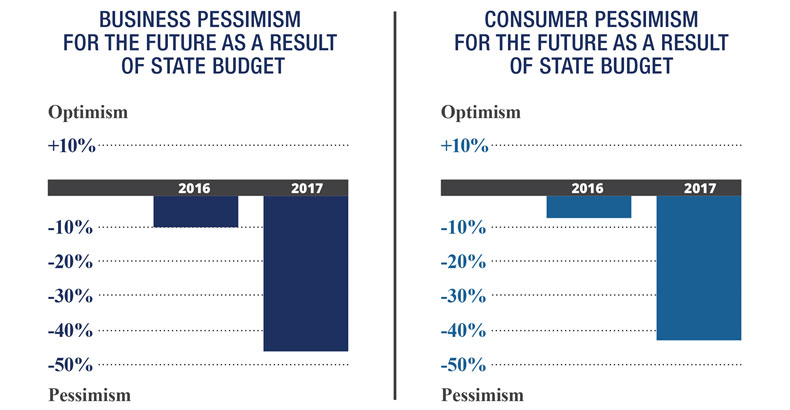 BankSA Chief Executive, Nick Reade, said the State Monitor results are a major cause for concern, naming the State Government’s bank tax as a contributing factor.

“These latest survey results have no doubt been impacted by the recent State Budget and the Government’s controversial bank tax, which is clearly inhibiting business confidence which in turn undermines investment in South Australia leading to fewer jobs.

“Make no mistake, the bank tax is a huge threat to our state economy.  It’s already hindering business confidence and will undermine our competitiveness on the national stage.”

Mr Reade warned that South Australia’s economy could find itself in serious trouble if business confidence continues to fall.

“This concerning drop in business confidence is feeding into an increased reluctance to hire new staff and invest in new technology, which is counter-productive for a healthy economy,” he said.

“We need to put the brakes on this ‘bunkering down’ mentality that an increasing number of businesses have adopted in recent times due to their lack of certainty, because if it takes hold it could easily lead to recessionary conditions down the track.”

The State Monitor also showed that despite a small rise in the latest survey, consumer confidence in South Australia remains at historically low levels at 98.7 points, up from 97.8 in February but still below the 100-point baseline.

Alarmingly though, consumer confidence regarding lifestyle stability, mood, state pride and the climate for consumer spending in the next 12 months fell to their lowest levels ever reported.

Confidence in South Australia’s rural regions has also plummeted to an all-time low.

State Monitor findings from the rural regions include:

Based on a statewide phone survey of 300 consumers and 300 small business owners and managers, the latest BankSA State Monitor is the 63rd monitor in a series that has tracked consumer and business confidence in South Australia since 1997. A baseline of 100 points is used to which the overall survey results are either added or deducted. A result greater than 100 represents a positive result and therefore more optimistic respondents than pessimistic, while a result less than 100 represents a negative result meaning there are more pessimistic respondents than optimistic.